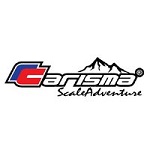 Based on a long wheelbase incarnation of the Recon G6 Certified SCA-1E, Carisma has taken the success of that first rig and produced an RTR with many additional features and performance enhancements. Carisma’s core values remain the same, and the brand’s ethos of producing products that offer Quality, Fun, Performance & Scale Realism has never been so relevant.

This is the first of a new generation of SCA-1E using a fully licensed body-shell, that blends the weight saving of Lexan, with the additional detailing of Injection moulded parts. It’s the best of both worlds, offering photo-realistic looks, but without the centre of gravity issues associated with running a full hard bodied rig. The forward mounted battery position alters the weight-bias of the rig to improve its ability to ascend steep inclines and aid in Rock Crawling. The CMS (Chassis Mounted Servo), keeps the steering servo up high and out of view, cleaning up the look of the front axle and offering better scale realism. New true Beadlock 1.9 wheels are shod with soft compound All Terrain tyres and easily allow for further adjustments in weight bias using stick on wheel weights.

As with the Coyote and the LYNX ORV, this is just the starting point for as detailed, or as simple a build as you feel. From Trail Running and Bashing, to G6ing and Scale Competition, the new SCA-1E Ford F-150 will allow you to experience the exciting world of Scale at whatever level you feel is best for you.

SKU: 14668 Category: CARS
Notify me We will inform you when the product arrives in stock. Just leave your valid email address below.