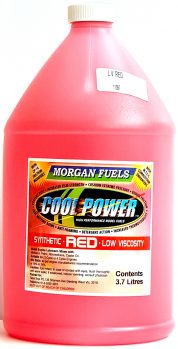 By – BRIAN WINCH.
Review of modelling products conducted by the AIRBORNE ENGIN-EAR.
PRODUCT. COOLPOWER LOW VISCOSITY OIL –(Red)
SUPPLIER. TATES PERFORMANCE HOBBIES.
Not too many years back we used SAE 70 oil in our spark and diesel engines. In our
charabancs (full size vehicles) we used, if the engine was in good condition, SAE 30 or 50.
The lower viscosity (for winter use) was preferred for its lower drag and ability to flow and
lubricate much quicker. Consider a model engine run on castor oil and left for a short time –
tends to be, shall we say, sluggish to turn. This is oil drag – most undesirable. The thinner the
oil the better it flows, penetrates and coats surfaces. Problem is it has to also stand up to the
rigours of the slugging parts in an internal combustion engine. In recent years it was accepted
that synthetic oils could be produced economically and they would work quite adequately at a
lower viscosity. When you consider the fuel we use in our model engines you need to
remember that (generally) at best the oil content is only 20% of the fuel. In most cases much
less than this, particularly so with some ready mixed fuels that can go as low as 14%. Another
consideration is the need for a high performance oil to suit heavy duty use. We certainly don’t
want to go back to the SAE 70 days (heaven forbid!) so we need a special application
lubricant to suit, for instance, helicopter engines and the big four strokes used in pattern
aircraft. For quite some time now the heli fliers have had the luxury of a special heli oil
produced byMorgans Fuels in USA. Problem was you could buy it only as a ready blended
mix. This can get a bit expensive if you slurp up a few litres per day. As well, the pattern
fliers wanted access to this oil due to the heavy load and high nitro fuel used in the range of
specialised pattern engines. The chief pilot at Tates, Eddie Edwards, spent a lot of time
belting the ears of the Morgans chiefs and finally won the day. Tates would have exclusive
sales rights to the special low viscosity oil as used in the heli mixes. Quick as a flash a good
drop of the new red ‘stuff ’ wound up on my bench and I gave it quite a fair flogging. Even
though “Tates” said they were using 23% I decided to really test it at 20% and….it worked a
treat with 10 nitro fuel. I ran a range of two and four stroke engines and stress tested it in a
two stroke at 17,000 r.p.m. for an extended period. Clear oil out the exhaust – head temp’
slightly lower than normal – couldn’t be better. I gave some to my field testers, Felix and
Peter Nieuwenhuizen (pattern fliers) and they used it in theirs and several other modeller’s
engines at the Wallerawang Float Fly. This venue is 3,000 feet above sea level and requires,
at least a tune change or, better still, a bit more nitro. With a mix of 23% LV oil and 10%
nitro all the models on test performed flawlessly with no tune change required and no
indication of the need for added nitro. As Felix said, “all the engines were very happy.”
This oil will not replace Coolpower blue but it will fill the need when high loads are imposed
on the engines, high nitro is used and lower percentages of oil are desired.
For general use – stay with the blue but if you impose higher than normal loads on your
engines – go for the red……..