AIRFRAME ONLY (NO MOTOR, SERVOS, BATTERIES OR RADIO)

POSSIBLE DAMAGED COWL AND CANOPY NO WARRANTY RETURNS OR REPLACEMENTS

All these kits may have imperfections like covering, colouring, canopy and cowl defects.  DESCRIPTION

The Corby Starlet is the first post-war Australian designed single seat aircraft to fly in Australia. The Starlet was designed and built by John Corby and Barrie Bishton of Sydney N.S.W. Australia. This design placed fourth in a world-wide design competition for small racing aircraft conducted by Rollason LTD in England in 1964. The prototype Corby Starlet first flew on the 9th of August 1967 in the small country town of Camden. Unknown at the time to the model designer (Chris White) the prototype Corby Starlet model also had its maiden flight at the same town of Camden nearly 38 years later. The Full-Size Starlet was a semi-aerobatic sports airplane made of an all-wood construction. The fuselage is a combination of spruce longerons and frames and is sheeted with plywood. The wing is a single-piece structure, consisting of a solid laminated spar and built-up ribs. The D-nose leading edge is plywood covered. The remainder of the wing, including the ailerons, is open-structure and fabric covered. The main undercarriage consists of spring-steel legs bolted to a stiffened frame in the fuselage, immediately behind the firewall. To this day many examples of this aircraft are flown in countries all over the world.

APPLICATIONS
Every attempt has been made to make the Sportsman Aviation Corby Starlet Giant Scale 38.5% model version of the full-size Starlet as scale as possible with only minor changes to enhance flying characteristics. Indeed, even the color scheme is modeled from a full-size plane that is flying today. The prototype model was flown with a Magnum XL-180RFS and the model is very well suited to this motor. Great care should be taken when setting up any new model and all the travel throws and C/G should be measured and kept as close as possible to the recommended settings as described in the instruction manual. This will allow maximum flight performance with maximum enjoyment factor! You will find the Giant Scale Corby Starlet very easy to take off and land. Once you have some time under your belt, you can really wring it out – pushing the envelope even beyond the full-scale! 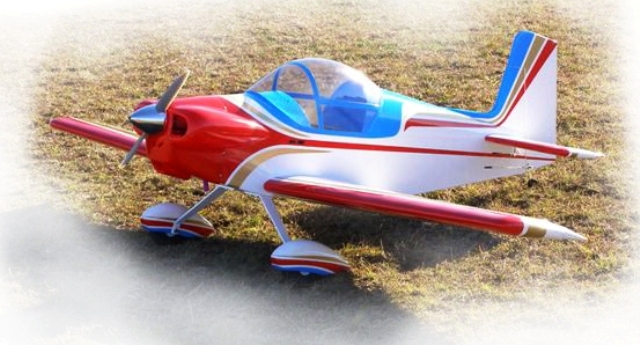