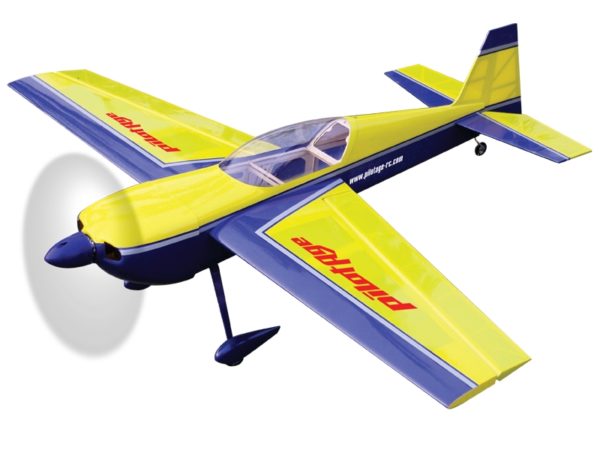 AIRFRAME ONLY (NO MOTOR, SERVOS, BATTERIES OR RADIO)DESCRIPTION
Edge-540 is designed and manufactured by U.S. company Zivko Aeronautics, located in Oklahoma. It’s a plane with a highly established extremely elastic wings. The fuselage also has high durability and can withstand overloads up to 15G. The aircraft has almost unlimited possibilities in aerobatike. He is able to rotate at 420 degrees per second. Rate of climb is – 3700 feet per minute. Edge is the favorite airplane of American aces. Biggest fan of this model – Kirby Chambliss, who along with 2005 champion Mike chard and the famous Peter Crazy on this aircraft participating in Air Race Red Bull Air Race World Series.In the manufacture of Edge-540 25E applies high precision laser cutting and assembly on the slipway. Fiberglass hood, close-fitting solid color film, duralumin landing gear, transparent canopy made a model of recognition, much like the prototype. Thanks to its small size and collapsible design, this rather large model fits easily in your car. Edge-540 25E can run a limited area, it is able to fly, where for large models is not enough space. Under the direction of an experienced pilot, this model is capable of performing all the pieces of classic maneuvers that are in competition to show the pilots of these aircraft.Edge-540 25E – compact, beautiful and great flying aerobatic model for experienced pilots, it is able to demonstrate the classic and 3D aerobatics. The model is controlled by four channels – the engine speed, ailerons on the two servos, elevator, rudder. The wing can be detached from the fuselage, which is very convenient for transport and storage.The kit includes: the assembled fuselage, wings and tail balsa construction, covered with color film, painted fiberglass cowl and fairings, transparent canopy, landing gear with wheels light series, motor-, parts management, labels and instructions.
APPLICATIONS
HINTS / NOTES
“