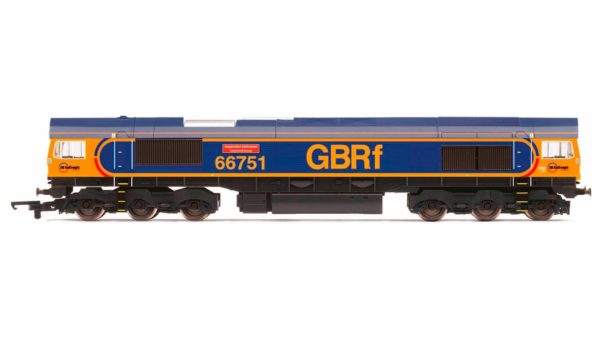 The Class 66 owes its existence to EWS as, following the privatisation of British Railway’s rail freight operations in 1996, the company bought up a number of the newly privatised companies, giving them a 93% share of UK rail freight and a fleet of over 1,600 ageing locomotives. These needed to be replaced with reliable diesel locomotives and EWS were aware that Electro-Motive Diesel, part of the General Motors Group in Chicago, had already supplied fifteen Class 59 locomotives to three operators in the United Kingdom.

The result was the Class 61 locomotive, later re-classified as Class 66 under TOPS, a development of the Class 59 and an order for 250 new locomotives was placed, involving an outlay of £375 million, the biggest investment ever in one order, for locomotives. The first locomotive shipped to the United Kingdom, arriving at Immingham, in June 1998 and was followed at the rate of eleven per month via Newport Docks, until the order was completed in December 2001. All that EWS’s engineers had to do was to remove the locomotives’ tarpaulins, unblock the suspension and hook up the batteries to make the engines serviceable, especially as they shipped with fuel and water loaded.

Freightliner, like EWS, inherited an ageing fleet of locomotives and impressed by the Class 66’s abilities, ordered a small batch of the Class 66/4 engines to begin to replace its Class 47 fleet, followed in turn by GB Railfreight, and Direct Rail Services. Freightliner continued to order from EMD, taking delivery of the Class 66/5 variant before taking on the new Class 66/6 sub-class, built with a lower gear ratio to haul heavier trains, albeit at a slower speed.

During 2004 the company took delivery of the first major upgrade to the class, the Class 66/9, the first Tier 2 emission locomotive to be tested in the United Kingdom. Identifiable, from one side at least, by the addition of a fifth door that provides access to the engine compartment, the fitting of the Tier 2 equipment prevented access from within the locomotive for the crew, leading to the modification.

The Class 66 locomotives are of the Co-Co type, with a cab at each end. Rated for 75mph operation, each has a GM 12N-710G3B-EC two-stroke engine, rated at 3,200hp at 900rpm. This is coupled to a GM AR8/CA6 main alternator, which powers six GM D43TR traction motors, one on each axle, developing a maximum tractive effort of 90,000lbf, and a continuous tractive effort of 57,000lbf, with a maximum speed of 75mph. Though this makes the Class 66 a less powerful locomotive than a Class 60, it is a stronger performer than the Class 47, 56, 57 and 58 locomotives. Fuel capacity is 6,550 litres of diesel fuel, giving a range of about 1,200 miles between fuelling. A ready-to-run Class 66 weighs 126 tonnes, giving a route availability rating of seven.